Interview for the Greenhouse Grower 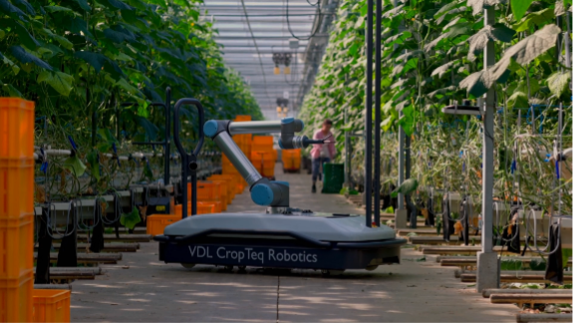 “We are not looking to reduce employment; we simply want to help the grower deal with the shortage of personnel,” stresses Quinten van Senten of GreenPEAK-IT (- a Bosman Van Zaal company). “The development process of the robot is focused on cucumber cultivation but in the future the robot will also be used for the cultivation of other vegetables. In a cucumber plant, the bottom 40cm of the leaves needs to be cut away so the plant does not put its energy into those leaves but into the fruits.”

Quinten explains that artificial intelligence (AI) and a visual recognition camera assess where the CropTeq robot should cut. “The visual recognition camera determines where the nodes are and creates a depth image to assess which way the leaf is growing,” he says. “The end-effector is an attachment that is specially designed to cut the leaves as neatly and precisely as possible. The end-effector is designed to push the stem against the shears; ensuring that the cutting is always tight along the stem and that no residue of the leaf remains.

“The robot is in its final stage before we offer it commercially. The robot has been tested and has run at a grower in the Netherlands, and we are now in the process of running the robot at several other growers to verify the results in other greenhouses. Once the final tests are complete, we would like to start offering the robot commercially, hopefully at the end of 2021.”

In the short term, the labour crisis is likely to be the biggest factor which drives grower investment in robotics once they are available. However, in the longer-term technology developers says that robots will offer many other benefits based on the supply and analysis of data from the greenhouse.

“Besides the robot, we have also developed a platform that gives the grower an overview of all the data that is generated in the greenhouse,” continues Quinten.

The PEAK-platform, which is already available for the market consists of three parts which bring together data and analytics, a digital twin, and performance management with predictive maintenance.  “The platform creates a hub for all data that has a direct or indirect impact on cultivation,” he explains. Internal data from climate computers, machines and hour registration systems are collected and stored in the data lake. The data lake is further supplemented with data from weather forecasts and gas and electricity prices. In order to provide information that can improve production, the data is directed into a growth model. This makes it possible for the grower to monitor everything, learn from it and take action in areas where there is more to be gained. By collecting all the data, we can also create an overview of the performance and maintenance for all the robotics and machines in the greenhouse.”

We use cookies on our website to give you the most relevant experience by remembering your preferences and repeat visits. By clicking “Accept All”, you consent to the use of ALL the cookies. However, you may visit "Cookie Settings" to provide a controlled consent.
Cookie SettingsAccept All
Manage consent

This website uses cookies to improve your experience while you navigate through the website. Out of these, the cookies that are categorized as necessary are stored on your browser as they are essential for the working of basic functionalities of the website. We also use third-party cookies that help us analyze and understand how you use this website. These cookies will be stored in your browser only with your consent. You also have the option to opt-out of these cookies. But opting out of some of these cookies may affect your browsing experience.
Necessary Always Enabled
Necessary cookies are absolutely essential for the website to function properly. These cookies ensure basic functionalities and security features of the website, anonymously.
Functional
Functional cookies help to perform certain functionalities like sharing the content of the website on social media platforms, collect feedbacks, and other third-party features.
Performance
Performance cookies are used to understand and analyze the key performance indexes of the website which helps in delivering a better user experience for the visitors.
Analytics
Analytical cookies are used to understand how visitors interact with the website. These cookies help provide information on metrics the number of visitors, bounce rate, traffic source, etc.
Advertisement
Advertisement cookies are used to provide visitors with relevant ads and marketing campaigns. These cookies track visitors across websites and collect information to provide customized ads.
Others
Other uncategorized cookies are those that are being analyzed and have not been classified into a category as yet.
SAVE & ACCEPT